So, a month of strolling and taking pictures in the Dales has gone by without a blog from me. It’s not been easy – I’ve been dying to show off about living in such a beautiful place and the Nature I’ve seen as the Sun threw wide its arms, saying ‘come on lad, fill thi booits’.
Even the milk-bottle legs got an airing (allowing all manner of flying objects to help themselves to a Jackson blood-fest).
Within a 25-mile radius of home the Dales have provided relaxing walks and waterfalls, stunning sunsets and glorious sweet meadows to melt the senses. The camera has worked overtime and illustrates the wonderful Yorkshire Dales through pictures much better than I can with words.

Trains in the Dales

Nature in the Dales

I also visited Appleby Horse Fair earlier in the month. Some locals complain about the annual fair while others are happy to make a bit from increased visitor spending, renting camping space and charging for parking. As a visitor I only see a snapshot of the event, of course, but it seemed well policed and had plenty of RSPCA officials on hand. I wasn’t around to clear up any mess though. For a short slideshow visit https://www.youtube.com/watch?v=VSu-Ypcw0zM

I could have filled the blog with many more June shots but you’d have probably fallen asleep … here are three shots taken at sunset from Winskill, Ribblesdale, looking towards Ingleborough, to help you snooze.

See you next month.

Ribblesdale is not going to be the usual magnet for trainspotters this year. Westcoast Railways’ Dalesman steam train was due to start running its regular trips on the line on 19th May. The company’s website contains this badly-worded statement: ‘Due to the continued closure of the Settle to Carlisle Line and that our efforts to find a suitable replacement route have been unsuccessful, we have to announce that the Dalesman trip for 2016 will unfortunately be cancelled.’ The Settle-Carlisle line is, of course, NOT closed – just a small section north of Appleby is being made safe after December’s floods – so it’s important that people continue to use the normal service.

In a bid to encourage passengers, from today a Day Ranger ticket will be available. This will reduce the cost of travel for many journeys on the world-famous railway. For details visit www.settle-carlisle.co.uk/
The photo was taken at Dent Station, this time last year.

With sciatica still plaguing me this week, the only walking I’ve managed is a couple of hobbles around my village of Langcliffe in Ribblesdale. The consolation is that there are a helluva lot worse places to be. It was whites v yellows on the mini football pitch on the ‘Green’. The churchyard was a mass of colours and wildlife, including this mistle thrush. When the blossom fully emerged the village looked pretty in pink. On the mill pond tiny ducklings were playful, then appeared scared witless as they lost sight of mum, giving off pathetic squeaks of panic. Stainforth Scar provided a fine backdrop.

I took a short drive up to Selside one day where I managed a few shots of Penyghent and then on to Ribblehead for a cup of tea. However, by then the old ‘clutch leg’ was telling me it had had enough. I just pray that good weather hangs around until all my moving parts are fully operational again.

Elections, voting systems and politics in general are not what my blog is about but I can’t help but add my two-penn’orth now and then, especially where Ribblesdale is concerned. Last week’s local council results for my ward, Settle & Ribblebanks, showed that 463 people voted for the Tory candidate; 641 didn’t vote for the Tory, so obviously the Tory was elected. A good 70 per cent turnout, too. The result reflects that of the last general election when the nation received a government which a minority voted for. Great system, uh?

While I’m on one, I’ve been trying to work my way through the ludicrously unwieldy Craven Local Plan which covers the contrasting areas of South Craven, through Skipton up the A65 to the rural western Dales. In some cases blindly following government dictats regarding local plans, councils have to report to their headmasters about how they are going to make developers and businesses stacks of money …, sorry, I’ll rephrase that: councils have to explain how they are going to make life better for us all over the next decades.

Most people who study this flawed and complicated master plan will be looking to see how it affects them close to home (as I did). One immediate reaction was that I couldn’t believe anyone who witnessed the last December’s major flooding of the area surrounding the river Ribble could contemplate building on land which for millennia has held back water, naturally slowing flooding further down the dale. Yet that is what is proposed for an area in Giggleswick and the edge of Settle. Flooding is just one part of the argument against proposals for that particular area (some of which have already been refused but seemed to have miraculously risen from the dead). I won’t expand here but urge you to spare a few minutes to visit www.rageo.co.uk Informal consultation into the Craven Local Plan draft was due to end on Tuesday, but will now run until the end of May.

Having quite a few ancient books cluttering up the house I often look through them for old photos of places around the dales. I like to visit those places to see how they’ve changed. With many of the scenes being in the National Park, there’s not always a lot of differences to be seen… above is a Langcliffe scene pictured 65 years apart. Below is Settle Cricket Club, the old photo taken in 1946 when a Yorkshire XI played against Settle, and the other one taken yesterday.

People were rushing for their sunglasses in Ribblesdale this week – not to shade their eyes from the welcome sun but to prevent glare from my milk-white legs which I exposed to an unwary public for the first time in a couple of years.
Last Sunday there was some lovely evening light which I was lucky enough to witness at Lower Winskill. The peaks of Smearsett Scar and a distant Ingleborough looked cool. 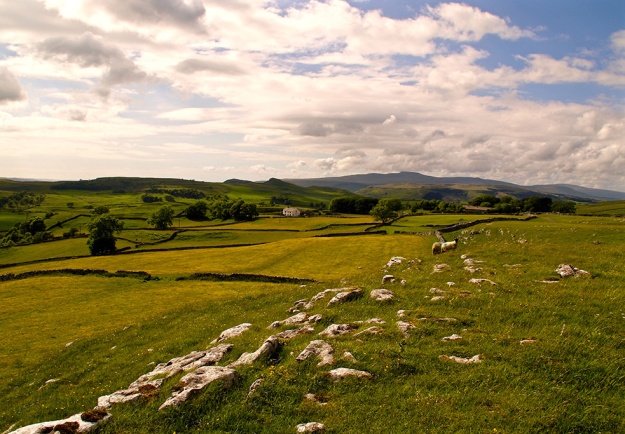 On Monday I popped back down to Langcliffe Mill pond to see if the tiny chicks were still around and was relieved to see there were still nine despite the presence of a huge heron. 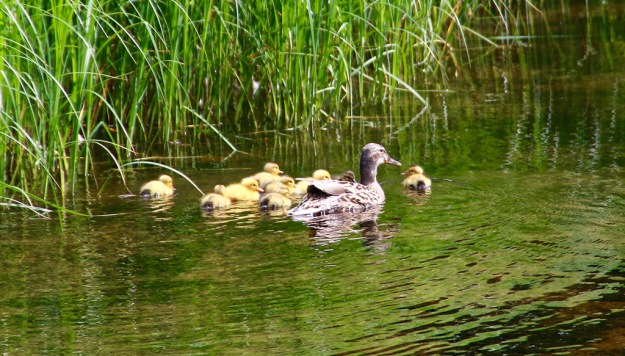 A goods train from Carlisle passed beneath me as I trundled over the footbridge and I thought what a better way this was to transport stone from the quarries than via the hundreds of noisy trucks which pass on the nearby B6479 road. 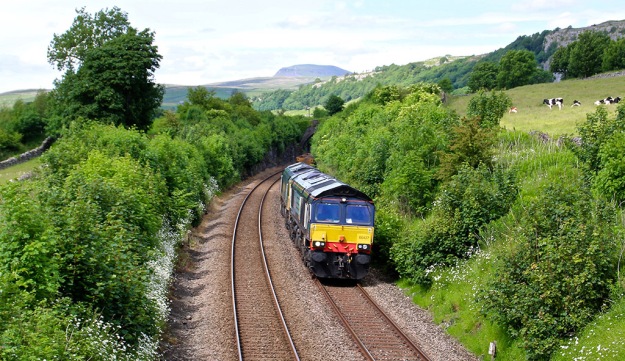 I felt sorry for the sheep on a humid Tuesday as they struggled with heavy woollen coats but found some shade beside this cute little barn next to the Ribble. Close by are these lovely allotments – a credit to those who tend them. 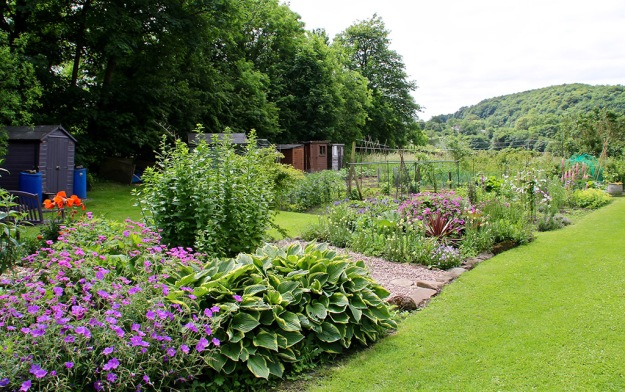 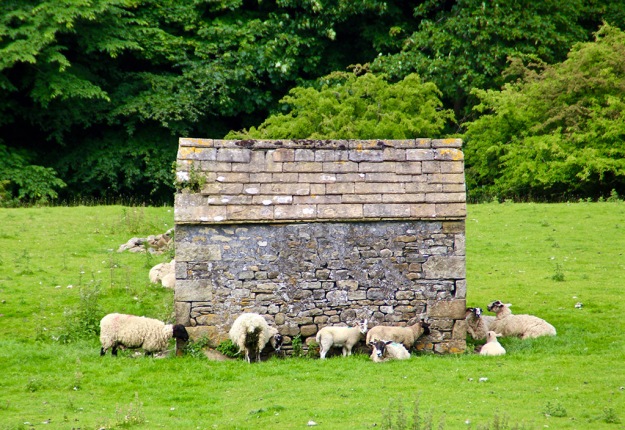 An earlier comment I read on Facebook had reminded me of a Grade ii* listed building in Ribblesdale called Lodge Hall, sometimes known as Ingman’s Lodge. Many walkers doing the Three Peaks will have passed by the 17th-century building which, along with several outbuildings, doesn’t look in the best of condition. I’m in no way having a go at the owner but I would have thought English Heritage or similar would want to ensure this architectural treasure is maintained for future generations to admire. The dog here didn’t seem too pleased with my interference. 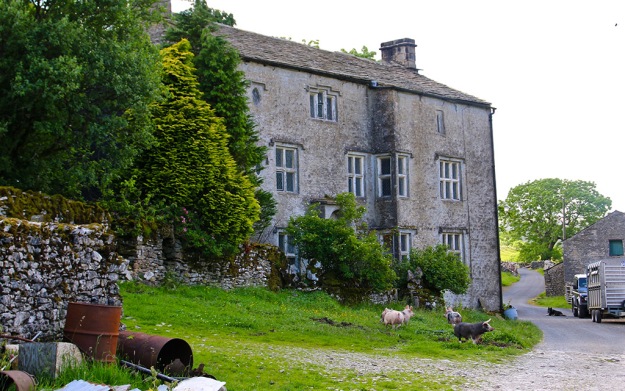 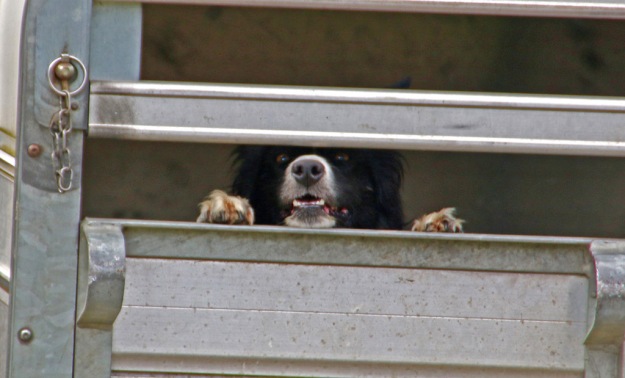 The same day, I drove down the top end of Dentdale and happened upon this steam train leaving Dent Station, and I also managed to capture it as it crossed Dent Head Viaduct. A great sight and tribute to those who worked hard to keep the Settle-Carlisle Railway open. (Can I assure friends here that I DO NOT need an intervention regarding any perceived obsession with trains.) 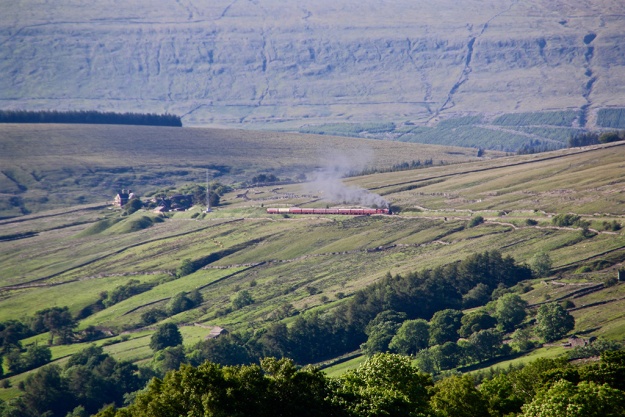 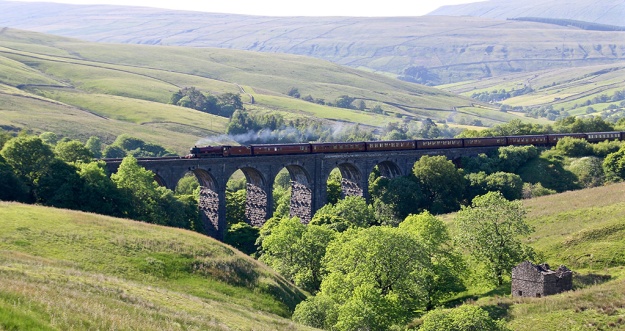 I got up early for a stroll by the Ribble from Langcliffe to Stainforth on Friday. But I was left downbeat by the sad state of the area around Stainforth Foss. It looked like there’d been a mini-Glastonbury Festival there … cans, bottles and other garbage strewn everywhere, even in the river. Goodness knows what it was like over the weekend – the place means a lot to me and I dare not go look just yet. Come on, Park Rangers and police – this behaviour is not just a disgrace but also illegal – do something about it.

On my way back home, as I was chuntering to myself about how I’d make the morons pick up the litter with their teeth, I popped my head into the Hoffmann Kiln. The light reflected from the bright, sun-lit greenery produced a stunning effect inside this man-made cavern. My first thought was what a tremendous art gallery this could become. 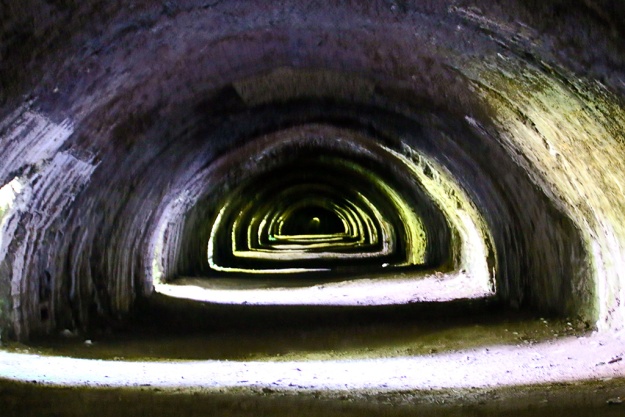 The weather? It’s been a week of sun, rain, hailstones the size of golf balls, high winds, gentle summer breezes and soaring temperatures, not to mention the thunder and lightning which played havoc with my electricity and computer. The ups and downs of summer in the Dales.